Whenever you do business with overseas suppliers or buyers, you will likely buy or sell goods or services in foreign currencies. Such foreign invoices and payments usually result in a real financial impact on your business that accounting systems report in the form of foreign currency gains or losses. Such effect can come from both exchange rate fluctuations and, surprising to many, fees charged by your bank or payments provider for currency conversions.  This article explains the primary sources of foreign exchange gains and losses and the best ways to manage them.

Foreign currency conversion fees in your gain or losses.

Foreign currency conversion fees are one of the most overlooked reasons behind your currency gains and losses.
When your bank or payments provider, such as PayPal or WorldFirst, converts currencies for your foreign payments, they will charge a foreign conversion fee.  This fee usually means that your provider will charge you a margin to sell you a given foreign currency amount than it costs them in the wholesale market. While many fintech companies such as HedgeFlows or Wise are upfront about such costs, most incumbent banks or payments providers are often less transparent. They include their conversion charges in their quoted exchange rates.
Most popular accounting systems, such as Xero, will record the cost of currency conversions as part of Foreign Currency Gains and Losses. Accruing a bill or invoice in foreign currency in Xero will take by default the exchange rates from XE.com in the case of Xero (1.1786 in the example below):

When such a foreign currency invoice is then paid from your home currency account via a currency conversion, Xero payments are processed using the real exchange rates (1.1500 in the example). This happens even if you accrue and pay the invoice on the same day; you will have two exchange rates recorded: 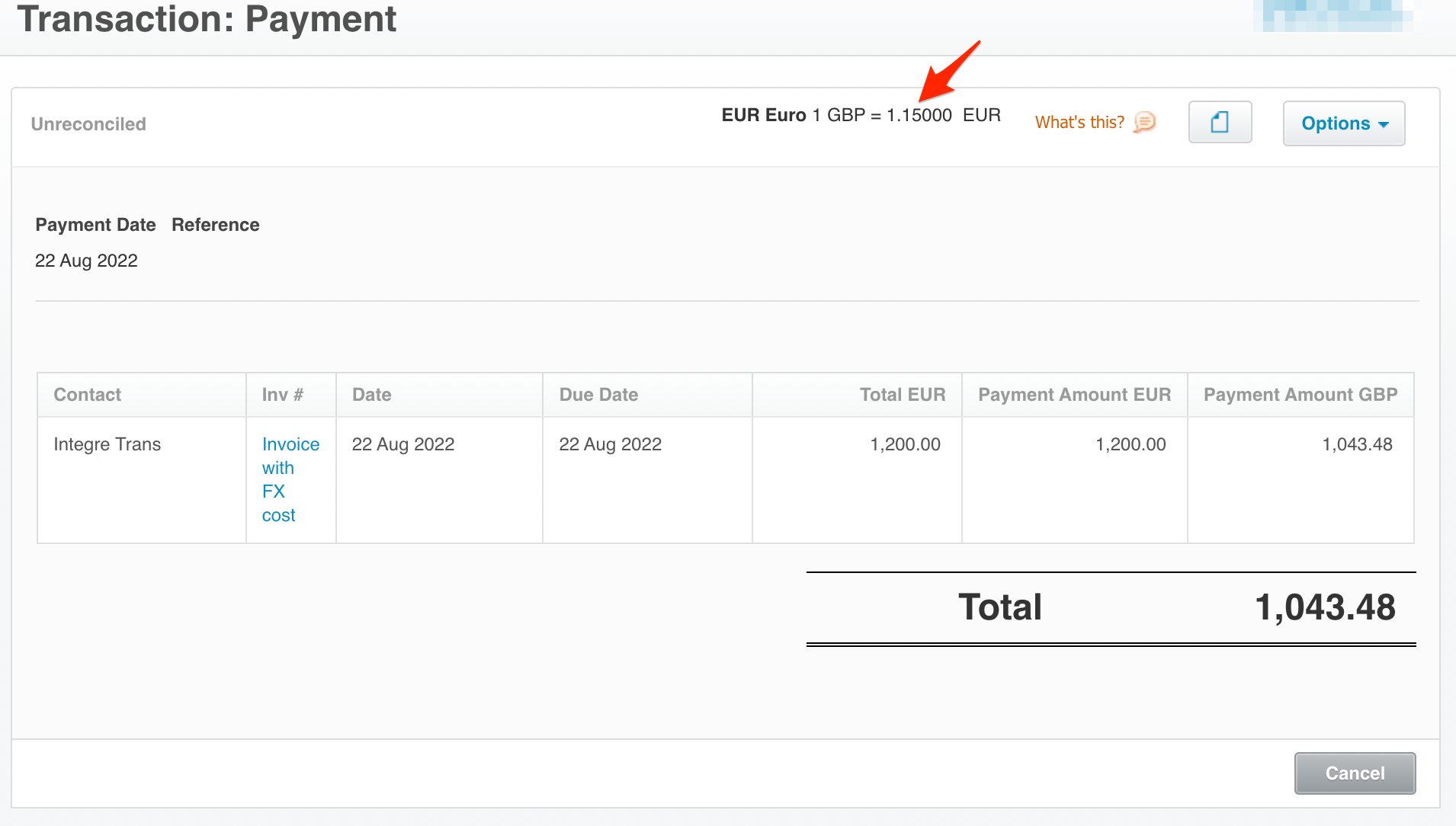 The resulting difference is then recorded in Realised Gain and Losses and has a direct impact on your business income:

Most Business-to-Business (B2B) trade happens on account (such as 30-day credit terms), and the lag between the invoicing and payment dates often results in a currency impact as foreign exchange rates fluctuate.  An average business invoice in the UK takes approximately 45 days to be paid, during which the exchange rate between Pounds Sterling and Euro or US Dollar can easily move 2-3%, for example.  In such case, the impact of exchange rates can be seen even before one pays a foreign invoice - as an unrealised gains & loss on an individual invoice in Xero or in the Unrealised gains and losses section on P&L:

What happens when you pay your foreign currency bill in Xero?

How to reduce your exchange losses.

Imagine the world where hotels or airlines only allow you to buy their services when you're about to use them and room rates or ticket prices...

The approach of small and medium-sized businesses towards FX risk management is very different from that of large public firms and foreign currency...

Five myths about foreign currencies that small businesses often have

Myth: Managing currency risks is not for small businesses
Fact: Businesses of ANY size that trade internationally may benefit from currency...